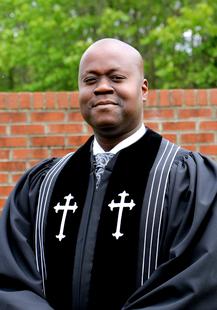 Jericho Baptist Church
"But seek ye first the kingdom of God, and his righteousness; and all these things shall be added unto you." Matthew 6:33

Rev. Harris accepted Christ as his personal Savior at the age of 15 and was baptized by the late Dr. Glenwood Morgan.  He joined Mount Gilead Baptist Church in Williamsburg, VA and served as a junior usher until he left home to join the military.

Rev. Harris enlisted in the United States Navy on July 2, 1990 at the age of 17. He served his country for 10 years, earning the rank of Hospital Corpsman 2nd Class.

In 2002, Rev. Harris entered the Prince William County (PWC) Police Academy.  Upon graduation, he transferred to the PWC Police Department as a patrolman.  He is currently a detective in the Violent Crimes Unit.

In 1997, Rev. Harris accepted the call for gospel ministry and was licensed by his father in the ministry, Reverend Dr. Alfred Jones, Jr. of the Mount Zion Baptist Church in Triangle, VA.  In January 2014 Rev. Harris was ordained. In July of the same year, he was called to serve at the Jericho Baptist Church in Ruther Glen, VA.  He was elected as the pastor of Jericho in May 2015.

Rev. Harris is currently seeking his formal education at Liberty University. He attributes everything that he has accomplished to God’s grace over his life and his understanding family. His heart is for the people of God and considers himself a servant to the Most High and His people. His mantra scripture is Micah 6:8 (KVJ), “He hath shewed thee, o man, what is good; and what doth the Lord require of thee, but to do justly, and to love mercy and to walk humbly with thy God?”